SUPERSATURATION AND THE STONE CRYSTALS

A NEW AND USEFUL REVIEW

THE FUNDAMENTAL MEASUREMENT OF STONE PROPENSITY

The three Moirai, or the triumph of death, Flemish tapestry ca 1520, Victoria and Albert Museum, London, depicts Clotho, who spins the thread of life, Lachesis, who measures out the length of the thread, and Atropos, the inexorable, who cuts the thread. In book 11 of the Odyssey, Odysseus travels to the underworld where, among other matters, he learns from Tiresias his own ‘fate’; that he will return to his home and his own wife; that he will travel again to a place so far from the sea his oar will go unrecognized; and that he will die in peace, by the sea and among his own people. But he must make an offering in that foreign place to appease Poseidon, who hates him for blinding Polyphemus, and that he must avoid the herds of Helios on Thrinacia, on his way home. His ‘fate’ was fixed, but the path to its inevitable conclusions depended upon his choices.

I put this picture here, and my brief and shallow comments on the Odyssey, to introduce the overarching power of saturation, which ultimately determines the outcome of a solution. Howsoever important the matrix molecules, they can influence only the kinetics of crystallization. By doing so they can affect which crystals might predominate, and certainly can delay crystallization long beyond the time a crystal resides in the kidneys or urinary tract. But saturation is what powers crystallization; without it nothing. With it, crystals may or may not form in the time you observe it. But a saturated solution is inevitably unstable; it contains a free energy that will eventually manifest itself in loss of precisely that mass which is above the solubility. Saturation is the fate of the solution; all of the kinetic modifiers determine only the path by along which that fate – conversion of free energy into solid phase – progresses. 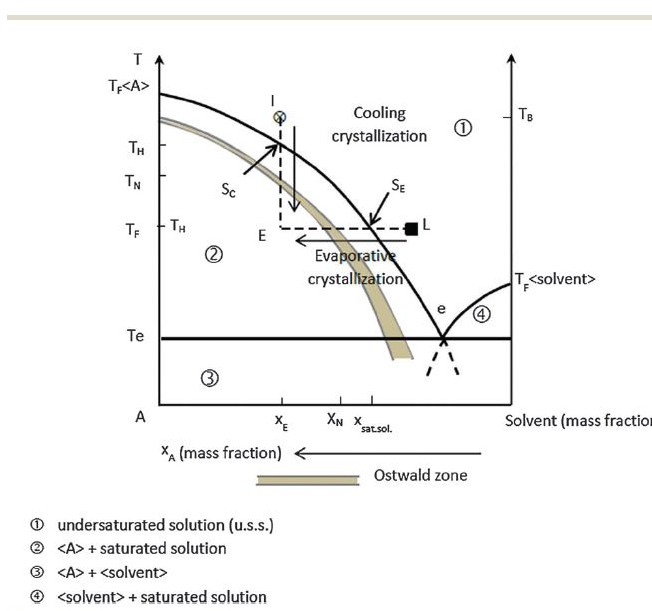 This review from the Royal Society of Chemistry is recent and reviews the fundamental physical basis for crystal formation. The topic is vastly complicated when different solvents and solutes are taken together. But what happens in the kidneys can be stated with reasonable simplicity; it is similar to crystallization from variation of concentrations by evaporation (Sections 3 and 4 of this review). The most simple and probably most useful measure presented is simply the ratio of the concentration of the material of interest divided by the concentration at saturation, the so called supersaturation ratio.

The diagram shows both processes expressed in mass fractions, the fraction of mass from solute and the fraction from the solvent. We begin with a system with a mass fraction (mass of solute/mass of solute + mass of solvent) of XE which occurs at the temperature TB. This is marked by the circled x on the diagram. The solution is homogeneous – the salt of interest is entirely dissolved and there is no solid phase, only the liquid solvent. The solid curve marks out the relationship between temperature and mass fraction of solute at the point of solubility, the solubility curve. Above that curve, area 1 of the graph, the solution is homogeneous – undersaturated. Along the curve it is saturated.

Crystallization by change of temperature.

Cooling to TH will bring the solution precisely to the solubility line for the mass fraction XE – vertical line from x downward to Sc. There is little likelihood of crystal formation of the solute A in this range. At TN and below spontaneous nucleation of N becomes high and will almost always have occurred by TF given a mass fraction of XE. The Ostwald limit curve is drawn as a band to denote the uncertainty of its exact limits. All points below the limit curve (region 2) are called labile supersaturated, meaning the solution contains the mass A of saturation + <A> the ‘extra’ mass of solid phase and will nucleate spontaneously. Points between Sc and the Ostwald limit are called metastably supersaturated in that the solution holds a concentration of above the solubility curve but not enough to make crystallization likely.

Whereas mass fraction is necessary to discuss solutions with two or more phases – eg solvent and solid phase crystallized A – supersaturation is gauged via concentration of the dissolved A in solution in relation to solubility which up until now we have simply referred to as along the so called solubility curve. What solubility means is that the solution has a concentration of A such that addition of more solid A will result in addition of precisely that mass of A in the solid phase. Of note, the dissolved A and the solid phase of A in such a saturated heterogeneous system are in an equilibrium such that some dissolved A will crystallize and some crystallized A dissolve at a constant mass fraction of solid A. This process selectively involves the smallest crystals so that with time, at a constant mass, the overall crystal size distribution shifts upward – Ostwald ripening.

At a fixed temperature TF, the point L at a mass ratio below saturation (C<Csat) solvent, water in this case, is removed by evaporation to achieve the concentration Csat, the mass ratio when C = Csat. In the range of supersaturation between X sat sol to XN, the Ostwald limit curve evaporation merely produces a supersaturated solution. Above XN, crystallization begins and SS falls to 1. This process is strongly analogous to what happens in the renal tubules, as water extraction by osmotic concentration will behave as would evaporation with the exception that the rate of water loss is measured in a few minutes so that crystallization cannot occur as slowly as in an evaporating solution. This matter of rates and the final crystal product requires information beyond where we are now, but simply said the solution is unlikely to be in an unsteady state and crystallization will depart from the idealizations of the diagram.

The eutectic point. Though not important for our purposes, it is the temperature at which solid phase A and solid phase – ice – of the solvent coexist with the liquid phase. As the mass fraction of A falls to 0 this temperature rises to the freezing point of pure water. As noted, in the opposite direction, pure A, TF is the melting point of pure A. region 4 is simply the binary region of ice and water for varying concentrations of A. Region 3 is ice; points along the line A are pure A, and those along the right axis are pure water.

TF<A>. This is the temperature at which pure A is liquid – its melting point.

For any solute in water supersaturation is the gauge that defines the propensity for phase change. At a constant temperature such as in the body, the SS ratio, as an example, defines whether the solution – urine for our purposes here – is undersaturated, metastably supersaturated, or unstably supersaturated provided we have, for the solute of interest, a knowledge of Csat and the Ostwald limits for that temperature. This is a main point of all of stone disease: Supersaturation determines if crystallization can occur, so it is a ruling variable.

From this we can derive what I might call a primary statement for all of stone disease: The urine supersaturation of an active stone former is too high with respect to the crystals of the stones that are being formed. Prevention requires that it be lowered.

The authors point out that SS is the gold standard for assessing crystallization potential, as they are well aware of its role as the driving force for the process of nucleation, growth, and aggregation. Their question was the extent to which conventional urine risk factors expressed as excretions could detect elevated SS values. They used retrospective analysis of data from well studied patients in whom SS had been calculated. They found that elevated levels of calcium or oxalate excretion were sensitive indicators of increased SS values but very non specific. A urine calcium excretion of about 230 in women and 280 mg/day in men were at an optimal point between sensitivity and specificity, but given the poor specificity the approach seemed flawed.

Enteric hyperoxaluria is a not uncommon cause of COM stones. Urine calcium is not high and may be low. LIkewise the normal ratio of calcium to oxalate molarity, normally 10 or more is much closer to unity. The authors were moved by these observations to calculate SS, molar ratios and the individual species in urine using not the common EQUIL program but the more elaborate JESS program. Questions included benefits of citrate, of oral calcium to reduce urine oxalate. Of interest, the authors point out the primacy of SS: “Qualitative and quantitative information about the chemical complexes (speciation) in urine is extremely important for evaluating the supersaturation of stone forming salts. This parameter is the gold standard by which the risk of stone formation is assessed..”

Their data were obtained from Vancouver and our own group. These included bowel patients and idiopathic CaOx stone formers and normal people. Models were created by variation of calcium and oxalate values.

Their main findings are that, though low, urine calcium is a critical driver of SS COM being the limiting reagent in the Ca Ox product so that giving calcium and raising urine calcium may not lower SS well.

Return to Walking Tour about Supersaturation

10 Responses to “SUPERSATURATION AND THE STONE CRYSTALS”