Even words themselves come and fade over time.

See how, in English language books since 1800, science which once ranked no higher than poetry rose to ascendancy, while poetry itself dwindled below even medicine. The word is about 0.016% of all words in the books, meaning ‘science’ is used on average 16 times in every 10,000 words, poetry only 4 times.

Surely there is some lesson here. Surely this graph says more than it shows.

If you put in the names of Newton, Einstein, Planck, and Freud, the first of these has stayed constant for the 200 years at about 0.001%, about one half of the usage of the word medicine. Einstein, and far below him Max Planck, rose up and occupy a space comfortably below Newton. Freud rose up like a Phoenix, far above

Newton, and true to my simile fell again, and falls now, no doubt to some lower plane.

Did I mention this?

Charles Pak and I do not register. Our graphs are blank. We are not found.

This means neither of us has reached the threshold of mention in at least 40 books in the English language. With time we may reach that threshold, or not.

Of course Google, the same one which runs the Ngram Viewer, lists us on pages of entries because we have written papers, and won prizes.

Charles and I are linked in ways other than our blank Ngrams. We are contemporaries. We were classmates in medical school and, seemingly by chance and without either of us knowing at the time, we each decided to devote our professional lives to the problem of kidney stones. Although we are friends we have seldom worked together. I admire his work, and believe he feels the same about mine.

I Found 65 Research Papers by Him on Potassium Citrate

If you search PubMed under potassium citrate and his name, you will find Charles has written 65 relevant publications.

It is this body of work I have come to review here.

Not all of it, but those articles that seem to me most important to all of us who work on the problem of stone prevention.

His first publication on citrate was in the proceedings of the Association of American Physicians, an august society sometimes called the ‘Old Turks’ whose members are

distinguished for their work in clinical investigation. It is simply a description of the use of the drug, but includes stone rates, which fell, and comprehensive measurements of supersaturation and upper limits of metastability which he innovated into clinical practice. In a way this paper said it all, and was foundational in calling attention to the drug and proving that the changes it made in the urine were those which should reduce stone formation.

The Potassium is as Important as the Alkali

Potassium and sodium citrate salts both provide alkali, but in this work with Khashayar Sakhaee, who

Because pH rose and calcium excretion did not fall with the sodium salt, supersaturation and stone risk from calcium salts rose. With potassium citrate, urine calcium fell and that balanced the rise in urine pH with respect to calcium phosphate supersaturation.

Charles and Khashayar recognized that because of this the sodium salt would not be ideal for the common calcium stone former, a very important insight. The lowering of urine calcium by potassium citrate and failure by sodium citrate is echoed in many papers, one of which we recently summarized on this site.

We now know, but did not, then, it was the first of these predominated.

You would care because citric acid is not a sodium or potassium salt but simply the one molecule – citrate – and therefore easier to provide as a treatment, easier to take, in principle, and presumably cheap. The problem is that citric acid is metabolized in the citric acid cycle, and it would be likely that any you ingested would soon become fuel for the fire.

This study remains important. Many beverages have considerable citrate in them but have a low enough pH (high acidity) that the citrate is mostly in the form of citric acid. All that citrate might as well not be there, for it will not and cannot raise urine citrate. Charles showed this in the paper just above, and years of science have proved that the urine citrate response is from neutralization of the chronic acid load of our diets.

I do not know if Charles loves this paper as much as I do.

Man Oh was the first to propose, I believe, that the sum of urine cations (Na, K, Ca, Mg) – urine anions (Cl, PO4) could index net GI absorption of metabolic anions, meaning food materials that can be metabolized in their acid form and therefore become a source of alkali production.

The thesis was that variations of urine citrate might simply reflect diet balance of net acid load vs. availability of metabolic alkali sources.

This figure from their paper appeals most to me. Urine citrate was indeed a direct function of net GI alkali calculated 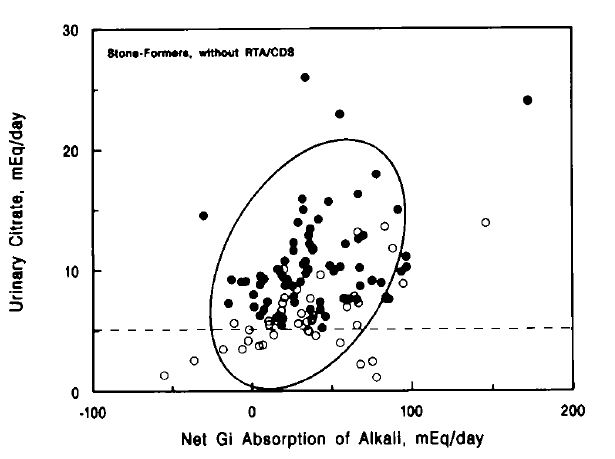 Given that chronic acid load is the common state of much of the ‘first world’ populations, the thrust of this work – that diet itself could be modified in order to reduce that load – seems sane and reasonable. Of note, simple measures of net acid production such as urine sulfate excretion, or total protein intake, did not show this correlation with urine citrate.

I have reviewed the citrate trials, and here is one of them in which Charles was a key participant.

There is no purpose

in reviewing again details I have shown before, except it is notable that someone who made most of his contributions in pathophysiology should also participate in a successful trial.

I never have done so, and am a bit envious. Bruce Ettinger was, incidentally, a polished trial expert who did our field a great service.

This was not the only citrate trial in which Charles participated. The other main trial, by Barcello et al, shows him  as senior author.

In other words, Charles was an investigator in both of the main trials proving that potassium citrate can prevent new calcium stones.

it in clinical practice, but when I do it is a formidable problem. In this paper, Charles is joined by Glenn Preminger, another of the young luminaries in Dallas at this time, to do a trial of potassium citrate in treatment of stones from this disease.

The form of the disease they studied is called ‘incomplete RTA. In the complete form, of course, blood bicarbonate is below normal, whereas in the incomplete form it is not. How you know it is RTA at all is urine pH is higher than normal, urine citrate is low – a sign of increased acid effects on the renal tubule – stones contain appreciable amounts of calcium phosphate and – in this case – an additional load of oral acid failed to lower the urine pH normally. They had nine such patients, 5 men and 4 women.

They formed fewer stones because supersaturation fell and urine citrate rose. Urine calcium fell from 238±73 to 164±61 mg daily (the ± figures are the standard deviations of these means), whereas urine citrate rose from 221±163 to 494±304; both changes were statistically significant.

This paper is significant for a lot of reasons. It shows that potassium citrate may well be a good treatment for calcium phosphate stones, a matter that has never been tried in a formal way. Because urine calcium falls and citrate rises, CaP supersaturation does not rise even though urine pH does rise. Calcium oxalate supersaturation falls because of the fall in urine calcium and the rise in urine citrate which binds calcium.

I do not believe that incomplete renal tubular acidosis is a coherent clinical entity. Patients with calcium phosphate stones have higher urine pH values than those with calcium oxalate stones. The higher pH is crucial in making more urine phosphate in the divalent form which binds calcium. But calcium phosphate stone formers frequently plug their renal tubules with crystals, and these plugs cause cell damage and inflammation. I cannot but believe these plugs will reduce the ability of the kidneys to make an acid urine, so the renal tubular acidosis is a consequence of the crystals.

Glenn Premenger went on to a brilliant career in academic urology and is presently Chief of urological surgery at Duke University.

Effects of Citrate and Calcium on Bone

Neutralization of chronic acid load ought to spare bone mineral losses, especially when combined with supplemental

calcium. Here, Sakhaee, Pak and colleagues studied the matter in women most prone to bone mineral loss – postmenopausal. The work was not a trial but a bone physiology observation using markers of formation and resorption. As against placebo, potassium citrate alone did not significantly reduce markers of bone resorp

tion. But with added calcium an effect was found.

This work supports the idea that combinations of alkali and calcium supplements can improve bone mineral balance. Of interest, potassium citrate alone reduced urine calcium, as is generally found, even though bone resorption markers did not change. One interpretation is that bone mineral balance changes were not present. Another is that they were and simply could not be detected.

More Than these Papers

I have been a scrupulous reviewer, picking out of a vast richness just a few lovely works, and in the process it is easy to lose track of the larger perspective.

In the course of his research, his writings for reviews and books, his many lectures, Charles made potassium citrate an international topic of interest. He stimulated others to do the two main trials, and encouraged physicians to use potassium alkali in their practices.

They do so, and patients benefit from such treatment.

He also worked with industry, and that may be most important of all. It is one thing to promote a compound and quite another to foster development of a useful pharmaceutical. Charles and his colleagues worked closely with Mission Pharmacal to study and establish the benefits of UroCit – K, their pill version of potassium citrate.

Charles also did a lot more than his work on citrate. He was a pioneer in the analysis of the physical chemical basis for stone formation, and how such measurements might be used clinically. He produced major work concerning the common idiopathic hypercalciuria of stone formers.

I will return to both of these issues when this site has provided a proper basis for their understanding.

I trained in Dallas, from 1967 to 1969 in the laboratory of Dr. Donald Seldin. It was a brilliant research institute, but devoted to mono-valent atoms. Calcium was a poor relative, and there was no kidney stone or bone and mineral program that I knew of.

It was Charles who built the magnificent program there, and I believe it was his charm, research ability, and organizing skill that attracted and held together so many wonderful scientists.

I have mentioned some already.

The papers I chose did not permit mention of Margaret (Peggy) Pearle, an international authority in our field.

Likewise, they are mainly before the work of Orson Moe, perhaps the most innovative and remarkable scientist in our field concerned with acid – base regulation and stones.

By way of disclaimer, as I have already mentioned, Charles and I have been professional colleagues and friends for decades.

But that is not why I wrote this tribute to his work.

I did it to bring forward into the present what was done to found and foster what we have now.

I did it to call to mind the interesting details in his papers which are easily lost as one review leads to another and no one reads the original anymore.

Mostly I did it because Charles was valiant for a cause, passionate to make thing better through the use of citrate, and because to remember is to experience again the delight of discovery.

7 Responses to “Potassium Citrate: The Contributions of Dr. Charles Pak”