IMCD and BD plugs: Do they have a role in stone formation?

In contrast to the almost normal appearing (except for sites of interstitial plaque) kidneys of idiopathic calcium oxalate stone formers (ICSF), our biopsy and mapping studies that now include ten additional kidney stone forming phenotypes (see Table 1), reveals striking changes in the renal medulla noted by both endoscopic and histopathology characterized by crystalline deposits in the lumens of inner medullary collecting ducts (IMCD), and ducts of Bellini (BD) (Figure 1), with less evidence of damage in the cortex. 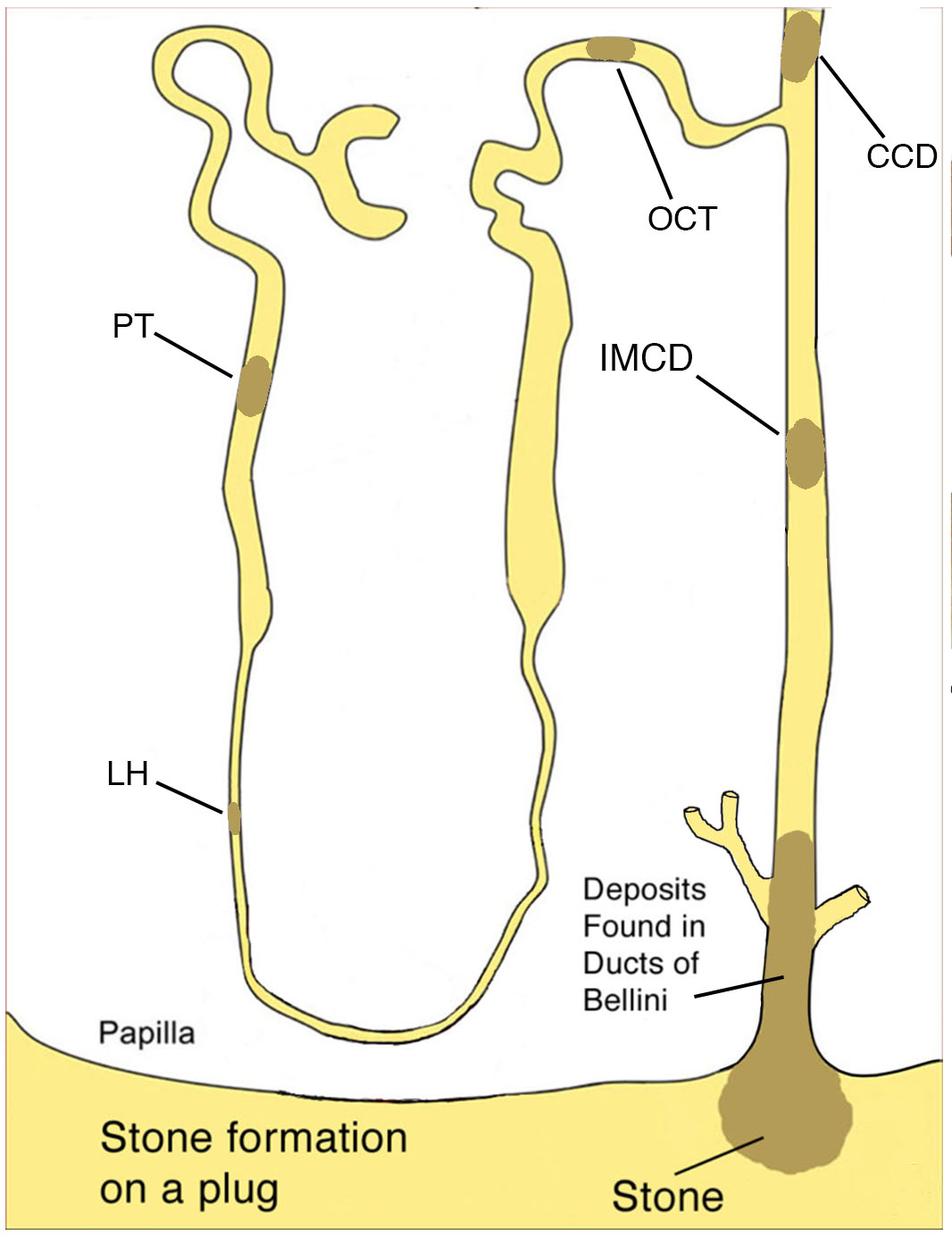 Illustration showing a BD plug/overgrowth complex and other sites of crystalline deposition alone the nephron in human kidney stone formers. A crystalline deposit is noted plugging a BD and at the urinary end it is covered with an overgrowth or stone. Intraluminal plugs are also common in the IMCD and less frequent in the loop of Henle (LH), distal convoluted tubule (DCT), cortical collecting duct (CCD), and proximal tubule (PT).

Endoscopic and histopathologic characteristics of IMCD and BD plugs

Endoscopic observations: Endoscopic examination of the renal papilla of all ten stone forming phenotypes listed in table 1 show varying degrees of change which include: 1) dilation of the openings of the BD some with or without protruding mineral plugs, 2) suburothelial sites of white (interstitial) and yellow plaque, 3) pitting and/or erosion of the tip of the papilla and 4) retraction of the papilla (Click on phenotype to see PubMed article).

Dilation of the openings of the ducts of Bellini at the tip of the renal papilla is a prominent feature of these kidneys (Figure 2, panels a-f). While the degree of dilation is generally about 2 or 3 times normal (Figure 2 panels a, b and f), the most extensive dilation (up to 20 times normal) is noted in brushite stone formers (Figure 2, panel c). The number of dilated BD also varies between phenotypes with the bypass for obesity patients showing the fewest (Figure 2a) and the dRTA (Figure 2f) and HPT possessing numerous dilated BD.

Yellow plaque represents deposits in the lumens of primarily IMCD, and BD (Figure 3). Yellow plaque in the lumens of BD is easily seen filling the openings of these dilated ducts or detected as protrusions from these ducts forming fixed stones. Fixed stones can form from end of those plugs protruding from dilated BD of any of the 10 phenotypes (Figure 3) (Table 1). These plug/stone complexes can be removed at the time of stone removal for further analysis (presented later in this blog). In addition, a few attached stones can be found at sites of interstitial plaque in HPT, ILEO, BR, SBR and HASF. Much fewer stones are seen in these phenotypes compared to ICSF patients.

Papillary pitting and retraction presents a quantitative gauge of architectural distortion that can be extensive in this phenotype. Brushite, dRTA and HASF patients can present extensive distortion of the normal papillary architecture compare to the other stone forming phenotypes. 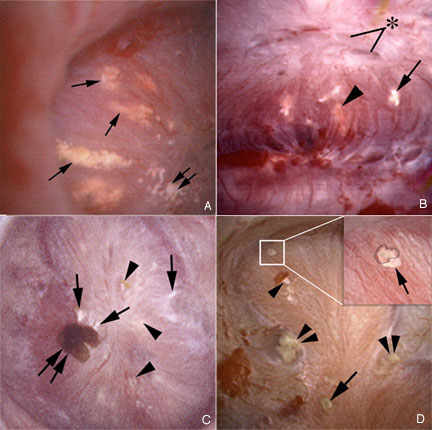 Endoscopic view of renal papilla from stone forming phenotypes with BD plugs, yellow plaque and attached stones to Randall’s plaque. Panel A shows extensive regions of yellow plaque in IMCD (arrows) and a single site of Randall’s plaque (double arrow) of a brushite patient. Panel B shows modest changes in a papilla from an ileostomy patient including dilated BD (asterisk), yellow plaque (arrowhead) and white plaque (arrow). Patients with small bowel resection (panel C) show attached stones (double arrows) in a region of white (arrows) and yellow (arrowheads) plaque. Patients with hyperparathyroidism (panel D) also have attached stones (within white box and insert) is magnified in the insert at the upper right; the stone is outlined within the insert by a black dotted overlay and the plaque border is indicated with an arrow. Areas of yellow (double arrows), white (single arrowhead) plaque and BD plug (single arrow) are seen on one papillum.

Histopathologic observations: The primary histopathologic changes of these 10 stone forming phenotypes are 1) mineral deposit formation along the distal nephron, 2) a loss of the tubular lining cells adjacent to sites of intraluminal plugs and 3) sites of interstitial fibrosis usually adjacent to the intraluminal deposits (Figure 3). The mineral deposits are seen to partially or completely plug tubular lumens and occasionally protrude out of the openings of the ducts of Bellini. While the primary sites of mineral deposition occurs in the IMCD, BD and outer medulla collecting ducts, mineral deposits are also found occasionally in the thin loops of Henle, distal convoluted tubules, cortical collecting ducts and proximal tubules depending on the stone forming phenotype.

Mineral type, size and number are the other critical variables concerning the characteristics of the intraluminal deposits. All three of these variables change depending on the stone forming phenotype. Hydroxyapatite is by far the most common mineral composing intraluminal deposits and is found in BP, dRTA, SBR, IlEO, HPT, BR, MSK, CYS and HASF. In HPT and HASF apatite in the only mineral found along the nephron. In dRTA, BP, SBR, and MSK apatite is mixed with CaOX, in cystine it is mixed with cystine, in ILEO it is mixed with sodium acid urate, and in brushites it is mixed with CaOx and brushite. In those phenotypes with a mixture of apatite and another mineral, apatite is usually found by itself in the IMCD and the mixture is located in the BD. PHOX is the only phenotype that exclusively has CaOx along the nephron including the proximal tubule.

The second major histopathologic change found in all stone phenotypes except ICSF, is a complete loss of adjacent lining cells at sites of crystalline deposition regardless of the mineral type (Figure 4). This finding probably explains way it is so difficult to remove plugs with their overgrowths, in that the intraluminal portion of the plug/stone complex is tightly fused to the basement membrane of the tubule. The only exceptions are the plug/stone complexes in the BD of cystine patients, whose plugs are easily removed at the time of surgery. In addition, we have not been able study the BD plugs of MSK patients by histology so we are not sure if there is cell loss at sites of BD mineral deposits. 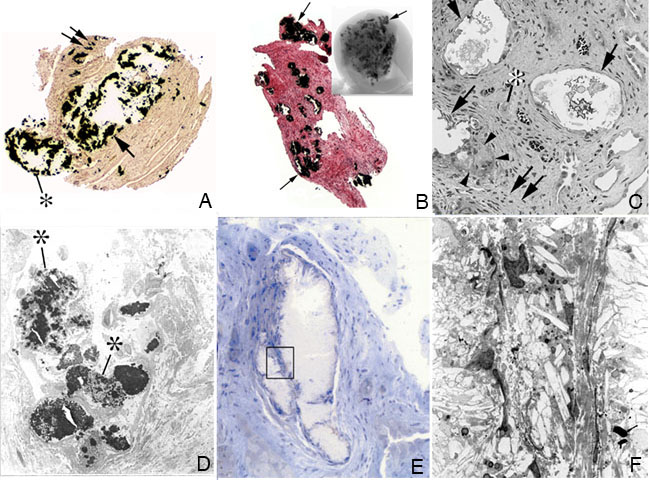 Histopathology of renal papilla from stone forming phenotypes with BD plugs and yellow plaque. Panel A shows a light microscopic image of a papillary biopsy from a brushite patient revealing sites if calcium deposits (apatite in this patient) in an IMCD and BD stained black by the Yasue method (arrow). The crystalline material is seen protruding from the opening of a dilated BD. A small site of Randall’s plaque (double arrows) is seen. Panel B shows numerous IMCD’s filled with Yasue positive material (arrow, the mineral is CaOx in this patient) from a patient with distal renal tubular acidosis. This same biopsy was also viewed by micro-CT (insert) to show numerous, small crystalline deposits in the papilla of these patients. Panels C and D show the histological changes occurring to the lining cells of those tubules plugged with mineral in brushite patients. Panel C is a light micrograph showing extensive cellular damage is several IMCD (arrows) filled with mineral. There are extensive regions interstitial fibrosis (double arrows) surrounding the plugged IMCD, entrapped loops of Henle (asterisk) and evidence of giant cells (arrowheads). By transmission electron microscopy (panel D) the tubular cells show evidence of injury and are filled with crystalline deposits (asterisks). Panels E and F show a light microscopic and transmission electron microscopic image of a plugged IMCD’s from an intestinal bypass patient for obesity. There is a complete loss of all lining cells. The boxed area in panel E represents the region seen in panel F.

Figure 5. Examples of BD plugs with overgrowths. Panels A-E show examples of BD plugs with overgrowth by both light microscopy (on left) and micro-CT (on right) for an idiopathic HA stone former (panel A), an idiopathic brushite stone former  (panel B), an ileostomy  (panel C), an primary hyperparathyroidism (panel D) and a medullary sponge kidney (panel E). A curved, dotted line divides the BD plug from overgrowth region.

Clinical consequences of overgrowths on plugs

It is conceivable that overgrowths on BD plugs could detach and grow within a calyx to reach 3 or more mm and present as passage of a clinical stone. The likelihood that an overgrowth would detach seems slim because our present data shows these overgrowths to be an integral component of the plug/overgrowth complex and most plugs are tightly fused to the wall of the BD. For discussion sake lets assume an overgrowth can detach, an obvious question arises: how would one know if a stone originated as the overgrowth over a BD plug and not on a site of Randall’s plaque or grew in free solution? Such a stone must have remnants of the plug at one border – where it was attached. We have not as yet observed removal of such a stone, but in fairness this has not been a specific surgical research aim.

Mechanisms of plug and overgrowth formation

A number of excellent studies have been performed on animal kidneys that have intraluminal plugs. However, only few studies have followed events that initiate human BD plugging. An appealing idea derived from cell culture work is that SS drives crystallizations, and some kind of tubule cell injury exposes hyaluronan rich areas of the membrane to the tubule fluid so that crystals may anchor there. Evidence for this in humans has come from studies of transplant kidney crystals in cortex, but no human studies have shown it in papillum except our own in which hyaluronan expression was found in cortex and papillum in the absence and presence of crystals in patients with PH1, and in the papillum of those with CaOx stones from obesity bypass. Hyaluronan expression was never found in papillae of ICSF even in regions of plaque. Other plug forming stone diseases have not as yet been studied in this detail. While urine SS values are a likely candidate controlling plug formation, SS in itself is not sufficient to explain composition of plugs and overgrowths. Pursuit of more basic understanding of plugging mechanisms in human tissues needs to go far beyond simple SS and crystallization.

17 Responses to “IMCD and BD plugs: Do they have a role in stone formation?”

Leave a Reply to Laura Bousada